Video Projection to the Surfaces

Like a fairy god mother of all objects, video projection mapping imparts vitality to plain motionless surfaces such as walls, tunnels, buildings. With the magic touch of the mapping technique, animations made based on the structures of the projected surfaces deconstruct the overall presentation of the medium while highlighting its outlines. Adding and manipulating elements within the structural boundaries of the physical surfaces furthers the intensity of the animation and makes the audience experience more engaging.

The latest projection mapping work by Nuformer themed on the Armenia’s literary history. To celebrate the city, Yerevan, being nominated as the UNESCO World Book Capital of 2012, they paid tribute to the Matenadaran, a storage place for ancient manuscripts and books, by translating its history to 3D video projection. The building, Matenadaran, itself without the video projected on has its certain significance. The significance is shown in a modest and quiet manner. In the film clip, the way how the animation introduces the building and tells facts about Matenadaran in an intriguing way brings the building alive. It is as if the building comes alive and tells the story itself. Taking advantages of the resemblance of the building structure and bookshelves, the animation plays with the four dented carvings and the centered arch. With the corresponding sound, those appearing and disappearing bricks enhances the vividness and the depth of the actual projected surface. Also, this brings the audience an engaging 3D visual feast.

Surfaces to the Video Projection

As the projection mapping technique has gone more noticed, more daring attempts have shown up. Common projection media are no longer satisfying to those designers. Most seen 3D video projection works are based on flat and blend surfaces like external buildings and the internal walls. The less detailed the medium, the easier the mapping process. Despite the difficulties of projecting animations on irregular surfaces, the outcome of 3D video projection on those detailed and challenging is often a huge success. The details of the surfaces intensify the vitality of the animation.

The following two works both handed on the themes of human figures. What differentiates is that one on a real person and the other on a mannequin. The video mapping on mannequin Michael by LCI successfully stood out the outlining structures of the mannequin by using a lot of corresponding background animation. In the clip, there was a moment when the projection on the mannequin and the one on the white board are identical. The unified projection showed the diverse energy of projection on different surfaces. The woods footage on the plain board was no different from what we have seen on everyday projection screen. When the footage was on the mannequin the relatively irregular surface, it was given more intensity.

The LCI video projection outcome yet looks pale next to Samsung’s Explore Your Dual World. Using a real male model as the projection medium intensifies the final projection. A real human face has more details than a mannequin. Those additional details such as eyebrows, eyelashes, pores, make more vivid the projection. Also, the position of the human being and the background surface furthers the sharpness of the projection.

In addition to the advancement by the tangible structure of the projection surface, the intangible influences of the projection media cannot be understated. Take the DMSP project I participated in for example. The Situated Media project, Lifehouse, took place in the Anatomical Museum, Edinburgh University. The mysterious nature of the museum and those human remains exhibits inspired the team to present human body in dynamic 3D video projection. The intensity of the human body theme animations was magnified when projected on the doors, the skeletons, and the statues in the museum. With the awareness of being in the Anatomical museum, the audience engaged in the journey when first stepped in the building. The sense of history and the eerie atmosphere of the museum led the audience to be more involved to the echoing animations.

The video projection and the projected surfaces are interrelated. They are mutually influential. The content of the projection gives even changes a story of a projection medium. A deserted place can be turned into an exhibit room with 3D video projection. The surfaces to project on either help or interrupt the final presentation. A compatible combination of the animation and the appropriate surfaces results a successful projection mapping and an engaging audience experience. 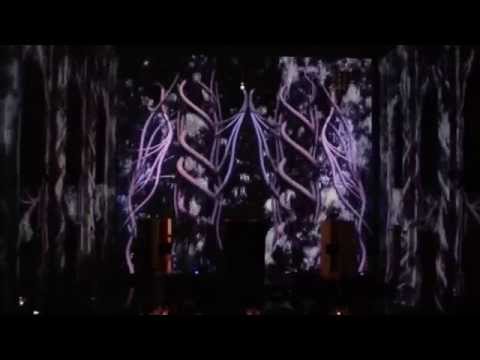 The weather is the most obvious influential factor. Regarding outdoor events, if the weather is unfavorable, such as raining, the event cannot be performed. Conducting the event under unfavorable weather increases the difficulty, and the presentation effect is less ideal. Additionally, the amount of audience may vary dependent on the weather; meanwhile, the promotion effect is probably much lower than expected. Finally, brightness is also a significant element. Because it is still bright at 9 PM in some high-latitude regions, the presentation has to begin late. This results in the event inflexible. These possible risks are considered if people choose the outdoor space for projection mapping presentation. By contrast, choosing indoor spaces avoids the troubles mentioned previously. Not only brightness but also the temperature can be controlled.

Indoor projection mapping encounters limitations more from the space. Generally, indoor spaces are usually not as open as outdoor ones. Most outdoor presentations use the building’s surface, which is smooth and facilitates projection. However, indoor presentations tend to use a room. There might be innate possible obstacles, such as pillars, in indoor spaces. Pillars sometimes obstruct the scene or projection. Despite the nice room we have, few pillars in the middle of the room stand. These obstacles increase the difficulties in projection. In addition, the other problem in indoor space is moving lines and crowd control. Indoor space is smaller, compared to outdoors. As a result, how to set the moving lines for audience and manage the crowd is vital. How many people can be accommodated simultaneously and what movement can reduce the obstruction on other audience are questions regarding indoor projection mapping that we cannot disregard.

Connecting to other media

Overall, 3D projection mappings reveal diverse effects in different spaces. Apart from creativity and professional techniques, other practical factors influence the presentation as well. Designers are recommended to consider needs and conditions when choosing the most appropriate space.

To advance the promotion of our project, we printed out some promotion posters and put them up around campus! How many have you spotted? 🙂

As our supervisor advised, the best way of keeping everything organized is to make check lists. Eva and I organized time tables and check lists for the presentation day and the day before. Hopefully these will do some help!

To prevent scaffolding from interrupting the audience experience, we decided to cover them with black fabrics. Last week we bought the materials and tried them out. It worked! They will be hardly visible in the dark.

This is the blog of the Situated Media project.